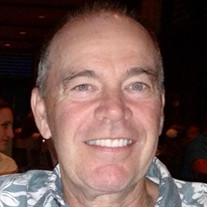 Charles Francis Meredith passed away on January 7, 2022 in Kea’au, Hawaii attended by family and friends. Charlie passed away due to pancreatic cancer. Just like he dealt with all experiences in life, Charlie managed his illness with strength and determination and wanted to spend as much time with his loved ones as possible. He was born in Hudson, Michigan on May 7, 1954 to Leo and Dorothy Meredith. Charlie figured out early on that he was a leader and enjoyed working for himself as an entrepreneur. He started more businesses than we can count, was never afraid to try something new or fail and he had a thirst for knowledge. He was known for his electrical contracting business, Always on Electric, in both Hawaii and Las Vegas, NV. Charlie met the love of his life, Christine, in August 1972 in a funny story of which sibling was supposed to take on a date. Christine and Charlie moved to Las Vegas, NV in 1984 to raise their family, pave a new path and in search of warm weather. They raised their two daughters, Janelle and Vanessa in Las Vegas and then moved to his beloved Kapoho on the Big Island of Hawaii. In 2018, his beloved home and neighborhood was overtaken by Lava. He was devastated after losing their piece of paradise but in true Charlie fashion he didn’t even pause but went forward with building his next Shangri-la with his own two hands. He made sure it had all the amenities he and his wife could ever want and this is where they have been residing. Charlie was the life of the party, an excessive talker, trusting, generous, could build or fix almost anything and exaggerated like Al Bundy. He left a lasting impression on all who were blessed to know him. Charlie is survived by his wife Christine Meredith, two daughters Janelle Wilcox and Vanessa Taylor, son in laws Kyle Wilcox and Bryce Taylor and four Grandchildren, Rylan Taylor, Hudson Wilcox, Irelynn Taylor and Grayson Wilcox, brothers Tom Meredith, Dennis Meredith and Doug Meredith and sisters Nadine Klebba and Elaine Dew. Charlie is preceded in death by both of his parents Leo and Dorothy, his sister Colleen Osburn, brother in law Michael Dew and father in law Jack Clark. Charlie’s ashes will be spread by his family so he can spend eternity among his favorite places. A Celebration of Life will be held this summer in Michigan because let’s be honest Charlie wouldn’t want to celebrate in the cold Michigan weather. Homelani Memorial Park will post updates for his Celebration of Life or email [email protected] to be notified of details. In lieu of flowers, please consider donating to a non-profit that he cared about. The Hope Center in Adrian, MI has been a refuge, community and positive place for his brother, Doug that has Downs Syndrome. https://hopecenteradrian.org/donate/ He was a beloved Husband, Father, brother, friend and neighbor. He will be greatly missed.

Charles Francis Meredith passed away on January 7, 2022 in Kea&#8217;au, Hawaii attended by family and friends. Charlie passed away due to pancreatic cancer. Just like he dealt with all experiences in life, Charlie managed his illness with strength... View Obituary & Service Information

The family of Charles Francis Meredith created this Life Tributes page to make it easy to share your memories.

Send flowers to the Meredith family.