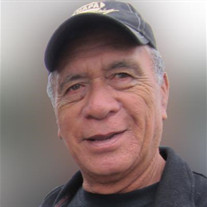 In Kahalu`u Mauka, three days after Thanksgiving, November 25, 1940. A male child was born to Harriet Moeola Makini and Henry Kauhane Macomber. They named him Edwin Dean, and called him Eddie. Edwin Dean was a name passed down through multiple... View Obituary & Service Information

The family of Edwin Dean Macomber created this Life Tributes page to make it easy to share your memories.

Send flowers to the Macomber family.