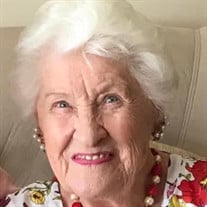 Rita L. Thompson, 97, died at her daughter’s home in Pahoa, Hawaii on March 21, 2021. She was born on December 2, 1923 in Neu-Bamberg, Germany, where she met her husband Lt. Col. William Roth Thompson (1918-1999) of Honolulu, Hawaii. She was a homemaker, wife, and mother of three children who lived in Kailua, Hawaii; Neu-Bamberg, Germany; Fuengirola, Spain; and Sarasota, Florida before returning to Hawaii in 2020. A Celebration of Life will be held at a later date, please contact Barbara Thompson at [email protected] for details. She is survived by her three daughters, Gerianne Dudash of North Port, Florida, Erni Thompson of Sarasota, Florida, and Barbara Thompson of Pahoa, Hawaii; her brother, Hubert Luttenberger of Neu-Bamberg, Germany; 4 grandsons, 1 great-grandson, and 2 hanai great-grandchildren; and several nieces, nephews, and in-laws.

The family of Rita L. Thompson created this Life Tributes page to make it easy to share your memories.

Send flowers to the Thompson family.